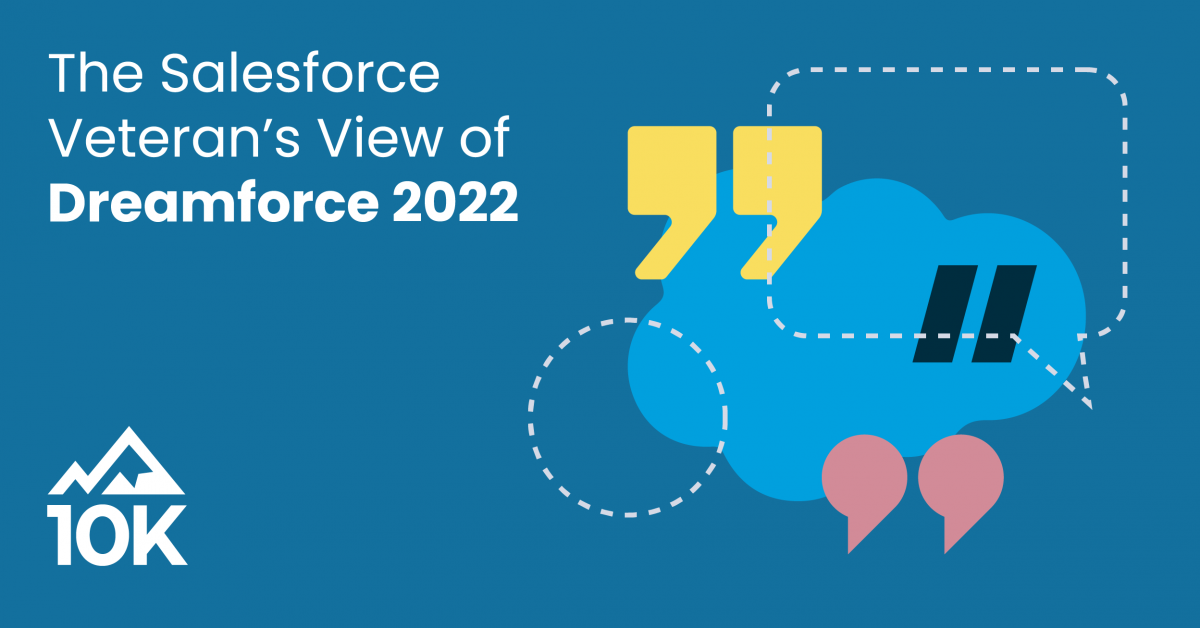 The Salesforce Veteran’s View of Dreamforce 2022

Similar to the scale and brand recognition of another California festival, (dare we call Dreamforce the Coachella of tech?) this year’s event promises to bring nearly 150,000 people to San Francisco for a star-studded lineup of speakers, value-packed sessions, a sure-to-be incredible show from the Red Hot Chili Peppers, and the opportunity to forge new friendships.

And plenty of steps. Pack your most reliable walking shoes.

At this point, you probably have the basic necessities ready to go. You’ve outlined your schedule (there are a lot of ways to do Dreamforce), decided what to pack for San Francisco weather (lots of layers including short sleeves, long sleeves, a light jacket, etc.), and are getting mentally teed up for a lot of socializing (please, give yourself room to recharge).

Now, it’s time to relish the excitement! Here is how some of the 10K team is planning to take on Dreamforce this year.

Jared Miller, 10K COO
My first Dreamforce was in 2008 and this year will be my 14th Dreamforce

Colin Powell in 2009. As a military brat, it was incredibly meaningful to hear from a man who dedicated his life to public service and accomplished and overcame so many challenges. Also, Dreamforce at that point in time felt more intimate, so that made the experience all the more special.

It is hard to narrow all of it down to one moment – my first one was being able to participate in the first True to the Core session. My second favorite moment was when I spoke at Dreamforce for the first time.

I went to my first Dreamforce about a year and a half into my Salesforce journey. At that point, I was committed to making Salesforce my career. I attended sessions that helped me with my current work but I also went to sessions that were outside of my realm so I could gain more understanding of parts of the platform I wasn’t working with yet. Push yourself!

Two of my favorite pastimes – trying to make it through the expo with minimal badge scan exposure and opening all of the “Thank you for stopping by our booth!” emails from booths I never actually stopped at. I’m kidding, mostly! But Dreamforce always delivers a buzz and energy I bring back to my work and goals.

Nick Hamm, CEO
My first Dreamforce was in 2008 and this will be my 13th Dreamforce

Then in 2021, when Dreamforce was held on a much smaller scale that year due to COVID. Foo Fighters also played that year to a super intimate crowd where Dave Grohl played drums and Taylor Hawkins sang “Somebody to Love” by Queen.

Talking to Will.I.Am at The Clift hotel after his DJ set in 2008; he played the Foo Fighters after party. I told him what a great set he put on and he was super friendly and down to earth.

Don’t be disappointed if you can’t do it all. There are so many sessions, keynotes, parties, and other miscellaneous events to try to keep up with, and it’s impossible to do it all and not totally wear yourself down. Pick the top two or three things you want to accomplish each day and be open to the days unfolding organically.

I always think of Dreamforce as a big family reunion. I’m excited to see the people whose journeys I’ve watched over the years and had the pleasure of getting to know. It’s also an awesome opportunity to meet new people for the first time.

Mike Martin, CCO
My first Dreamforce was in 2009 and this will be my 10th Dreamforce

There are so many, it’s hard to choose. Dreamfest 2013, Green Day played AT&T Park. About 30 minutes into the set, the rain got the best of the sound system and shorted all the speakers.  Billie Joe and crew improvised and played a few songs they knew the crowd could help with for another 30 minutes. We were all soaked from the rain, but it was an amazing show!

Be intentional about setting up meetings and conversations with folks ahead of time. It’s a busy week, and it’s easy for time to pass without seeing that one person you wanted to catch up with. As an east coaster, I take advantage of the time change – breakfast is one of the best times to meet folks before the craziness of the day begins!

Reconnecting with the Ohana! Especially at the traditional end-of-the-week celebration, the 10th Annual michaelforce Cigar Shindig. It’s a chill evening of drinks, cigars (optional, of course), and friends. I wouldn’t miss it!